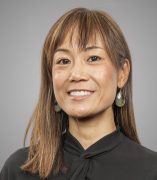 Kim D. Ricardo (née Chanbonpin) joined the John Marshall faculty in 2008. Professor Ricardo teaches Lawyering Skills, Criminal Law, Torts, Gender Race and Class, and National Security Law. She has also taught Introduction to the U.S. Legal System to LLM students in China's State Intellectual Property Office and at Masaryk University Faculty of Law in the Czech Republic. In 2014, she was a Visiting Professor at Seattle University School of Law.

Her scholarly writing considers redress and reparations law, policy, and social movements in the United States. Her work has appeared in the U.C. Irvine Law Review, the Northwestern Journal of Law & Social Policy, and the Mercer Law Review, among other publications.

Professor Ricardo is a member of the State Bar of California, and has been involved in several pro bono publico cases litigating a variety of legal issues, including post-conviction relief, Violence Against Women Act self-petitions, and police brutality claims. She sits on the Illinois State Bar Association's Criminal Justice Section Council. Professor Ricardo is currently serving as Immediate-Past President of the Legal Writing Institute. She also proudly serves on the Board of Governors for the Society of American Law Teachers and on the board of the Chicago Dancemakers Forum.

Professor Ricardo received her bachelor's degree in English from the University of California at Berkeley. She earned her J.D. from the University of Hawai'i at Mānoa, William S. Richardson School of Law, graduating cum laude with a Certificate in Asian-Pacific Legal Studies. After law school, she was a law clerk to the late Judge John S.W. Lim, Intermediate Court of Appeals in Honolulu. Professor Ricardo also earned an LL.M., with distinction, and a Certificate in National Security Law at the Georgetown University Law Center. While in Washington, D.C., she interned at the World Bank. Prior to coming to John Marshall, Professor Ricardo was a Westerfield Fellow at Loyola University New Orleans College of Law.