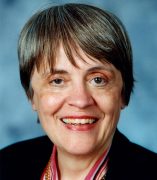 Between college and law school, Ann Lousin studied political science at the University of Heidelberg in Germany. After graduating from law school in 1968, she was a research assistant at the Sixth Illinois Constitutional Convention, where she worked on the drafting of the 1970 Illinois constitution. From 1971 to 1975, she was on the staff of the Speaker of the Illinois House of Representatives, including two years as Parliamentarian of the House.

She has served on several not-for-profit boards and governmental commissions, including a term as Chairman of the Illinois State Civil Service Commission. She is active in the commercial law committees of the American and Chicago Bar Associations, and has been the chair of the CBA Constitutional Law Committee. Professor Lousin has been a leader in other legal organizations, including service as Chair of the Board of Governors of the Armenian Bar Association from 1995 to 1998. She has been appointed representative to the Advisory Committee for the ABA's Rule of Law Initiative in Armenia.

She lectures and consults on the Illinois Constitution, general public law issues, and commercial law in the U.S. and abroad. In 2009 she was elected a member of the American Law Institute.