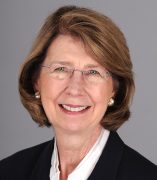 Kathryn Kennedy joined UIC John Marshall Law School as a full-time faculty member after years of private practice. She had practiced with the law firm of McDermott, Will & Emery in Chicago and was an actuary with the actuarial consulting firm of Towers Perrin.

She became a Fellow of the Society of Actuaries in 1976, two years after her graduation. She graduated from Northwestern University School of Law, summa cum laude and Order of the Coif. Due to her combined legal and actuarial background, she offers the law school a unique perspective in the area of employee benefits law. In 1998, she led the school's efforts to offer an LLM in Employee Benefits, the only one of its kind still in the nation. In 2005, the school expanded its offerings with a MS in Employee Benefits for non-attorney professionals. In 2006, she published a textbook, entitled Employee Benefits Law: Qualification and ERISA Requirements, which was updated by a second edition in 2012 and a third edition in 2017. She also has published a textbook, entitled An Introduction to Employee Benefits Law, in 2020.

Dean Kennedy was recognized as 2009 ASPPA's Educator of the Year. She is a member of the Fellow of The American College of Employee Benefits Counsel (ACEBC) and has served on its Board of Governors.

Dean Kennedy has chaired the Center for Tax Law & Employee Benefits since 2001. Beginning in the fall of 2012, the Center began offering three LLM degrees - Tax Law, Employee Benefits, and Estate Planning – and two MS degrees – Tax Law and Employee Benefits. She served on the IRS's Advisory Council for Tax Exempt/Government Entities (known as the ACT) from 2009-2012 and on the U.S. Department of Labor's ERISA Advisory Council from 2005-2008. She is an active member of the Advisory Boards of Practicing Law Company and Drake University's National Advisory Council for the Actuarial Science Program. She has testified before the U.S. Senate Finance Committee on several occasions and has proposed legislation in the area of executive deferred compensation plans. She has served as Chair and Vice Chair of the Employee Benefits Committee of the ABA Section of Taxation, after serving as Chair of the Distributions Subcommittee.

Dean Kennedy is the primary faculty advisor for The John Marshall Law Review. She formerly served as Associate Dean for Advanced Studies & Research for 2007 through 2017.