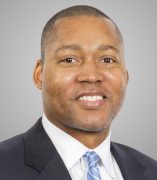 Samuel Vincent Jones is as professor of law, associate dean,  and one of Chicago’s noted public intellectuals.

Prior to joining the tenured law faculty at University of Illinois at Chicago, Jones practiced commercial litigation at K&L Gates (formerly, Hughes & Luce, LLP), one of the nation's largest law firms. Thereafter, he served as senior counsel at AT&T, and later as corporate counsel for labor and employment at Blockbuster, Inc., then the nation's largest home entertainment company.

Jones was one of two law professors to be the first African American males in the 117-year history of the John Marshall Law School to receive the rank of full professor. His work has been cited in textbooks and journals at some of the nation’s most prestigious institutions, including, Harvard, Yale, Cornell, Georgetown, and Berkeley, the U.S Advisory Council on Human Trafficking, as well as the United Nations. Jones has served on the visiting residential faculty at Northwestern Pritzker School of Law and the University of Florida Levin College of Law, and has presented his work at some of the world's leading universities, including, Harvard and Oxford.

Some other legal honors include being:

Widely known for his excellent dexterity and prowess over a wide variety of complex legal issues, Jones has written a series of highly influential publications.

In Darfur, the Authority of Law, and Unilateral Humanitarian Intervention, Jones crafted a theory of humanitarian intervention that authorized countries to balance the United Nations restrictions on intervention against human rights imperatives in a manner that recognized the general utility of law and dangers of moral arbitrariness. So convincing in nature was his theory, its influence extended beyond the legal profession. In a published analysis of Jones’s theory, one scholar noted that the portrayal of military intervention depicted in the hit TV show, The West Wing, most clearly flows on some level from the unilateralist arguments that Jones advocates.

In Judges, Friends and Facebook: The Ethics of Prohibition, Jones took the first step in enunciating the ethical risks judges encounter with online relationships. Jones opined that because of the potential for Facebook friendships to evolve into intimate relationships, and the reality of social impulses that are inimical to the exercise of proper judicial duties, judges are required to embrace ethics that restrict their capacity to engage in online relationships that weaken the public’s confidence in the judiciary. Jones's "restrictionist" exhortation had a chilling effect on judicial conduct in Illinois according to at least one Illinois Supreme Court Justice. Nonetheless, his theory emerged as one of the most influential expressions about the nature of judicial conduct and legal ethics, earning Jones speaking engagements, the cover of the Chicago Daily Law Bulletin, and appointment by the Illinois Supreme Court as an ethics instructor for its judicial education conference. Jones has also appeared on ABC News and CBS news, respectively, when ethical questions arose regarding Cook County State’s Attorney Kim Foxx’s handling of an investigation involving Empire star, Jussie Smollett, and former FBI Director, James Comey’s handling of his personal notes.

An ardent defender of Kantian conceptions of human dignity and the idea that respect for human dignity should remain unencumbered by another’s impulses, social rank or individual talent, Jones’s work cautions against the distribution of rights between groups based on notions of fairness rather than human dignity, on grounds that fairness is unduly susceptible to bias and political exploitation. In A ‘Teachable Moment’ on Marginalized Male Victims, a New York Times op-ed, Jones asserts that in order to preserve moral authority, people have a responsibility to condemn all violence and that rebuke should not turn on whether the victim is heterosexual or homosexual, male or female, or a member of a group to which we belong, but whether there was an offense made against a person’s human dignity.

Concerned about the spate of police killings of unarmed minorities, and the source of growing discord between law enforcement and minority communities, Jones authored, FBI Warning of White Supremacists Infiltration of Law Enforcement Nearly Forgotten. After exposing the threat posed to law enforcement and racial minorities alike, Jones concluded that, the white supremacist threat should inform all Americans that today’s civil discord is not borne out of a robust animosity towards law enforcement, most of whom are professional. Rather, it’s more representative of a centuries-old ideological clash, which has ignited in citizens of good will a desire to affirm notions of racial equality so that the moral ethos of American culture is a reality for all. He warned that the white supremacist network may be just as destructive and far-reaching as that of foreign terrorist groups.  His piece became a social media phenomenon, garnering millions of reads, and sparked a national discussion about the relationship between right wing extremism and law enforcement. The work was the feature topic on multiple news platforms, leading to Jones’s appearance on TV and radio shows, including Huffington Post Live and Chicago’s Cliff Kelley Show, and would be cited my numerous papers and magazines, including Esquire, The PBS News Hour, The Oregonian, The Times-Picayune, and Huffington Post.  Consistent with Jones’s warning, years after his publication, in November 2018, New York Times Magazine reported, White Supremacists and other far-right extremists have killed far more people since Sept. 11, 2001, than any other category of domestic extremist. Similarly, the Department of Homeland Security would later warn the U.S. Congress that the threat from White Supremacists is “a primary threat.  Jones would later appear on Chicago news radio, WBBM, to address the infamous Laquan McDonald shooting and his recommendations for increased emphasis on law enforcement officer and public safety.

Jones also authored the highly regarded, "An Oppressive Cook County Courtroom." He opined, [o]ur nation's perennial allegiance to the idea that courts are public so that justice may be discussed and criticized in public has such strong appeal to the personal ethos of American culture that even the nation's highest court is open to the public and permits note-taking. So should Cook County officials have discretion to ban citizens from taking notes during public court proceedings? So influential was his piece, the Chief Judge of the Circuit Court of Cook County issued General Administrative Order No 2014-06, which flatly prohibited judges from instituting general bans on courtroom note-taking for the first time in the Cook County history. The Chicago Tribune would subsequently publish, Judge Sullivan, Take Notes: A Law Professor Schools a Cook County Judge in the First Amendment, identifying Jones’s work as the catalyst for the new regulation and robust improvements in Cook County courtroom procedures. Later, Jones would appear on Chicago Tonight, one of Chicago most popular new shows, to discuss the state of Cook County’s judiciary.

In "Ending Bacha Bazi: Boy Sex Slavery and the Responsibility to Protect Doctrine," the first law review publication dedicated to exposing the culture of pedophilia in Afghanistan, Jones opined that boy sex slavery is a constitutive and central feature of Afghanistan, and that Afghan provincial governors, military and police officials, are openly engaged in the sexual exploitation of Afghan’s boy population. Jones concluded that, the Afghan government's failure to safeguard its populace from sexual violence has significantly undermined U.S. counterinsurgency objectives, raising serious questions about prospects for peace and security in the region. Within months after the publication of Jones’s analysis, the U.S. Department of Defense Inspector General launched a full investigation into the Afghan government’s complicity in the systematic sexual exploitation of Afghan boys. Thereafter, in February 2016, the United Nations General Assembly would issue Report, A/HRC/31/NGO/X, citing Jones’s work and characterizing Bacha Bazi as a deeply disturbing practice and gross violation of human rights.

In 2010, Jones wrote his landmark piece, Invisible Man: The Neglect of Men and Boys in the Publicity Regarding Human Trafficking. The work explored the intersection between American criminal jurisprudence and commercial media discourse as it relates to publicity regarding human trafficking. Jones argued that while female vulnerability is often highlighted in contemporary media discourse, male vulnerability is consistently obscured by modern-day media expressions of male dominance and invulnerability.  Jones boldly reasoned that media-driven, socially constructed conception of masculinity rendered scores of men and boy victims of commercial sex, pornography and forced labor virtually invisible and widely neglected by society at large.  Jones boldly reasoned that men and boy victims of human trafficking may outnumber women and girl victims in some regions.  Nearly a decade after Jones wrote Invisible Man, the U.S. State Department Office to Monitor and Combat Trafficking in Persons, in 2017, would publish, Assisting Male Survivors of Human Trafficking, and assert that “men and boys represent nearly half of the total number of human trafficking victims,” but are more likely “to be neglected by government and service providers,” seemingly aligning itself with the central position Jones advanced in Invisible Man.

Having majored in Philosophy at Chaminade University, and completed Columbia Law School’s renowned Legal Theory Workshop, Jones is a recognized writer of legal philosophy.  In The Ethics of Letting Civilians Die in Afghanistan: The False Dichotomy between Hobbesian and Kantian Rescue Paradigms, Jones reasoned that current judgments regarding Hobbesian and Kantian theory point to a prodigious appetite for locating divergence in Hobbesian and Kantian schemas for deciding when rescue is right. Jones argues that although this divergence rejects the possibility that the empirical effect of Kant’s deontological moral obligations can be coterminous with Hobbes’ duty of self-preservation, one’s adherence to one theory or the other doesn’t necessarily produce completely distinct outcomes. When discussing existing antinomies between Hobbesian and Kantian procedures for deciding the rightness of rescue, Jones reasons that Hobbes and Kant methods for deciding the right action can produce equivalent outcomes in situations where self-preservation represents the stronger ground of obligation between competing moral rules.

Some other notable scholarly publications include:

Jones has appeared as an expert commentator on national and local news radio and television, including ABC News, CBS Chicago, and quoted in leading newspapers, including the Dallas Morning News, The Times Picayanne, Chicago Daily Law Bulletin and the Chicago Tribune.

In a highly distinguished U.S. military career, Jones ascended to the field grade rank of Major from the enlisted rank of Private within 20 years and retired. He is a former U.S. Army judge advocate, U.S. Army military police captain, and U.S. Marine infantryman.

Some other military honors include, being:

Dean Jones continues to serve as a special adviser to various judicial offices and organizations. He has served on the Legal and Budget Committee for the Juvenile Temporary Detention Center of Cook County and on the Board of Directors for the Chicago Innocence Center. He has also conducted instruction for various nonprofit and government agencies, including the National Bar Association, Illinois Judicial Council, Illinois Courts and U.S. Department of Homeland Security. He currently serves on the Cook County Justice Advisory Council Board and Hearing Officer for the Cook County Officers Electoral Board.