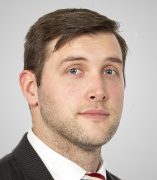 Josh Freeman holds a JD from UIC Law and joined the Writing Resource Center in 2019. He began his career as a law clerk for Judge James E. Snyder in the Commercial Calendar Division of the Circuit Court of Cook County. After two years at the Circuit Court, he moved to his current position as a law clerk for the Honorable David W. Ellis of the Illinois Appellate Court, First District.

As a clerk, Josh sees firsthand the effect of good legal writing. He believes the process of legal thought is expressed in writing, and that lawyers are professional writers. To him, it is equally important to learn how to think like a lawyer, and to write effectively in plain English. Because he’s had mentors impress the importance of learning to write on him, he now hopes to share that wisdom with students before they begin their careers.